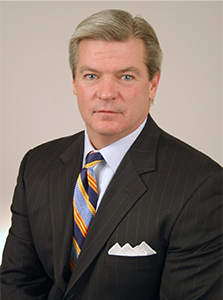 Chris has been practicing law for over thirty years, and has been with DeCaro, Doran, Siciliano, Gallagher & DeBlasis, LLP since its doors opened in 1993. He became a partner in 1994, and has managed the Litigation practice group for the past twenty-five years.

Mr. Dunn graduated from Villanova University with honors in 1984, and earned his J.D. from the University of Baltimore, School of Law, in 1987. He served a judicial clerkship with the Honorable Albert T. Blackwell, Jr., Court of Appeals of Maryland, before entering private practice in 1988 with the firm’s predecessor O’Malley, Miles.

In 2011, Mr. Dunn was elected as a Fellow of the American College of Trial Lawyers. This select membership is the highest honor bestowed on a trial lawyer and is conferred upon less than one percent of all trial lawyers in the nation who have mastered the art of advocacy and whose professional careers have been marked by the highest standards of ethical conduct, professionalism, civility, and collegiality. In 2017, Mr. Dunn was appointed to a third consecutive three-year term on the Maryland Court of Appeals Rules Committee. In this role, Mr. Dunn, along with judges and attorneys throughout the state of Maryland, assists the Court of Appeals in the development and drafting of procedural rules governing all aspects of litigation in the Maryland court system. In 2014, Chris was inducted into the American College of Trial Advocates. Mr. Dunn was also named Maryland and Washington D.C. Super Lawyer in the years 2007 through 2020. For twenty-five consecutive years, Mr. Dunn has been honored by Martindale-Hubbell with the highest possible rating for both substantive ability and ethical standards. Chris was appointed to the Board of Directors for the St. Thomas More Society in 2019.

A significant portion of Mr. Dunn’s practice is focused in complex civil litigation including products liability, professional malpractice, construction litigation, personal injury, and premises liability litigation. He also has an extensive appellate practice, and has successfully represented a number of clients before the Court of Special Appeals, Court of Appeals, and United States Court of Appeals for the Fourth Circuit.

Mr. Dunn is licensed to practice in both state and federal courts in Maryland and the District of Columbia. From 2000-2001 served as President of the Prince George’s County Bar Association, where he earned the reputation as an innovative leader. Additionally, Mr. Dunn has served on the Judicial Nominating Committee from 1994 through 2007 and two terms on the Maryland State Bar Association Board of Directors. Mr. Dunn is regularly asked by clients and colleagues to serve on panels, lecture, and present seminars in the areas of general liability claims, litigation and claims management, and risk management.