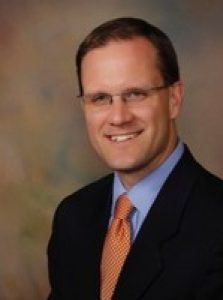 Steve Bergeron was born and raised in the Finger Lakes Region of upstate New York, in the small town of Penn Yann.  After studying history and graduating with honors from Ithaca College, Steve moved to Northern Virginia in 1992 to attend law school at American University in Washington, D.C., earning his J.D. in 1995.

Steve has been practicing in Northern Virginia since 1996, for most of those years as an insurance defense lawyer, trying cases throughout the Commonwealth of Virginia.  In 2018, he opened his own practice in Fairfax, and recently joined DeCaro Doran as of Counsel.

In addition to his law practice, Steve has written and taught other lawyers about handling auto injury cases and has experience in pedestrian, bicycle, and uninsured motorist cases, as well as dog attack and premises liability.  Steve has a particular interest in sports concussion research and has handled auto collision cases involving traumatic brain injury.

Steve lives with his wife, Ly-Lan and his three children in Northern Virginia.