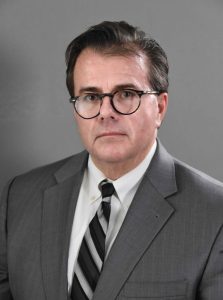 Steven J. Parrott has been a practicing attorney for more nearly four decades, and in 2019 joined DeCaro Doran as Of Counsel.

His prior legal experience includes a judicial internship with the Honorable Frank A. Kaufmann, Chief Judge, United States District Court for the District of Maryland, and a judicial clerkship with the Honorable Austin W. Brizendine, Circuit Court for Baltimore County from 1981 to 1982. Subsequently, he was associated with a number of law firms in Maryland and the District of Columbia.

Steve is barred in Maryland and the District of Columbia and has extensive experience and success in complex defense litigation matters at both the trial and appellate level in state and federal courts.

Steve lives in Annapolis, Maryland with his wife and daughters.